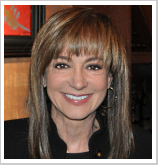 Gurwitch joined forces with famed makeup-artist Laura Mercier in 1996, after realizing the imminent paradigm shift in the beauty industry, propelling niche lines to the forefront of the cosmetics business. The combination of Gurwitch’s business savvy and foresight coupled with Mercier’s talent provided a solid basis for a strong, growing business based on technique and a high-quality product.

Now available in more than 800 stores in 27 countries, the Laura Mercier line includes an extensive color collection, skincare line, bath and body collection and instructional video and website, which cumulatively grossed more than $200 million in 2009.

In 1999, Gurwitch was named a finalist for Ernst & Young’s “Entrepreneur of the Year Award” for Houston, TX, and in 1994 BusinessWeek included her as one of the “Top 50 Chief Executive Prospects in the Nation.” Gurwitch was the 2008 co-chair for the March of Dimes’ Best Dressed Luncheon and was inducted into the March of Dimes’ Best Dressed Hall of Fame. She was also named one of Houston’s “50 Most Influential Women” of 2010 by Houston Woman Magazine.

She resides in Houston, Texas, where she’s the chairman of Gurwitch Interests.